This book is written for everyone who wants to learn about the mysterious phenomenon of kundalini and use it to reach the pinnacle of human development – enlightenment. The book is also for those who are going through an involuntary awakening and seeking help to alleviate their symptoms and make the best of this event.

I have been treating clients who had an involuntary kundalini awakening for a number of years and I know that this can be scary. The last thing these people want is more ‘horror stories’ about the kundalini. And I can reassure you right here that this will not be another book full of scary stories about the kundalini but a guide that will help you to understand what is happening to you and to recognise it for what it is: a positive event that will urge you to live a healthier and more spiritual life.
For both kinds of people – those who are seeking a safe awakening of the kundalini and those who are looking for help after an involuntary awakening – this book will show you how to use the kundalini to develop towards enlightenment in leaps and bounds. You will learn that kundalini is like the fuel that will carry the vehicle of your body and mind towards your highest potential of love, wisdom and bliss. 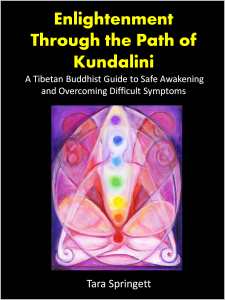 Sign up for your FREE KUNDALINI TEST and (occasional) NEWSLETTER